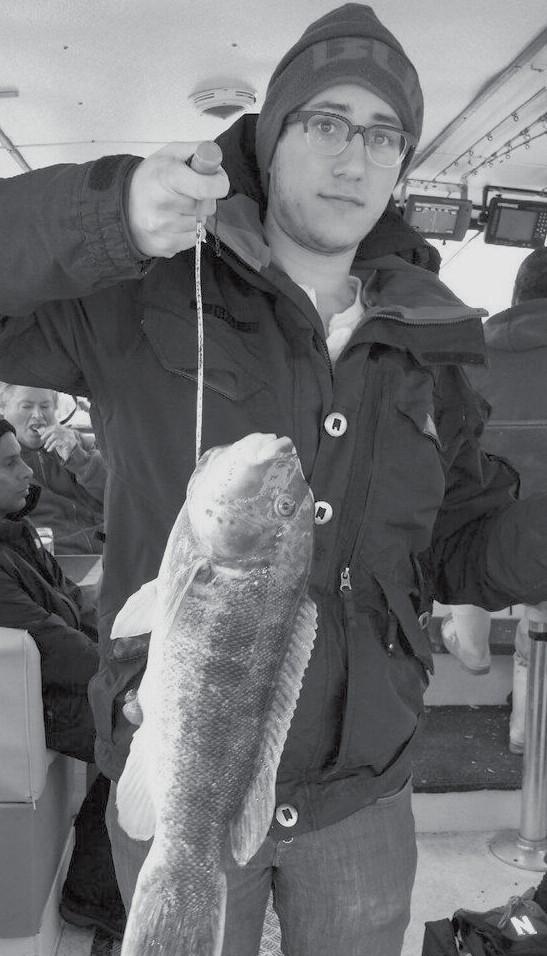 Ken Jr. aboard the Karen Ann.

This past week, blackfish dominated the local fishing scene. For the moment, striped bass took a back seat to these bottom dwellers. Ordinarily, Thanksgiving week and up until the final countdown on Dec. 15, bass finish the season with a bang, but not so this fall. That big body of fish has passed us by. Done in by blustery winds and some cold fronts, bassin’ for the most part has become an exercise in futility.

However, as fate would have it, I’m not closing the book yet on the 2014 striper season, and here’s why. Some herring — a favorite food for migrating bass – has moved into the area. And once again, there have been birds up from the Breezy Point inlet and south towards the channel bordering Sandy Hook and the Atlantic highlands. Birds up translates into fish below, pushing bait as it frantically tries to escape feeding fish.

I’ll bet with this week’s forecast for warm southerly winds, the pendulum will swing toward another late run of bass.

That being said, let’s get back to blackfish. Captain Frank, a local of Rockaway, was at the helm of the Karen Ann this past week, and showed what 50-plus years of experience can do for you. Throughout the week and into the weekend anglers on board limited out and then some. Captain Frank and I will be sailing daily, so if you want to avoid some premature cabin fever, come out and wet a line.

On Saturday, the fishing grounds looked like a veritable parking lot, as local boats invaded the waters offshore, taking advantage of a beautiful day. The echoes of fishermen could be heard as rods bent throughout the fleet. This run of fish continues to go strong and should last well into the New Year. The fish should, as the season progresses, move into deeper water as temperatures drop. You might want to keep that in mind if you’re venturing out in your own boat. Just be conscious of the weather and sea conditions this isn’t the time of year to take any chances.

Finally, thanks to those who reached out to me regarding last week’s column regarding Ronnie’s passing. I appreciate the following, and if you want to share a report or picture feel free to email me at captvinniekac@aol.com.

Until the next tide…