Our pal and next-door neighbor in this space John Jastremski breaks down the first Subway Series matchup of the year this week. However. before interleague play began in 1997, fans of a certain age can remember the annual Mayor’s Trophy Game, a mid-season exhibition contest played by the Mets and Yankees from 1963-1983.

But did you know there was a Mayor’s Trophy’s Game before the Mets came to town? Starting in 1946, the Yankees faced off against Gotham’s NL clubs, the New York Giants, and the Brooklyn Dodgers on a semi-rotating basis until both of the NL teams left for the West Coast after the 1957 season.

Game 1 – Polo Grounds, July 1. Yankees 3, Giants 0. Tommy Henrich homered to back the combined seven-hit shutout by Bill Wight and Mel Queen. According to one Giants player, quoted in The Sporting News on August 14, “One of those American League umps called a phantom double play, though the pivot infielder was never near the bag. They were trying to hurry the game along, while we were hustling to win.” LP: Hal Schumacher. Attendance: 27,486.

Game 2 – Yankee Stadium, August 5. Yankees 3, Giants 2. The Yankees scored the game-winner in the bottom of the ninth, and there was an altercation between Babe Young and Art Passarella on the final play. Young screamed that the AL umpire had robbed the NL by calling Joe DiMaggio safe at home on a sacrifice fly by Gus Niarhos. In the first inning, Joe Page broke Johnny Mize’s hand with a pitch. Mize was out until September 13 and then promptly broke a toe in his return. WP: Cuddles Marshall. The loser was Woody Abernathy, even though he held the Yankees hitless for six innings, allowed only four hits in total, and two of the runs he allowed were unearned. Attendance: 25,067. 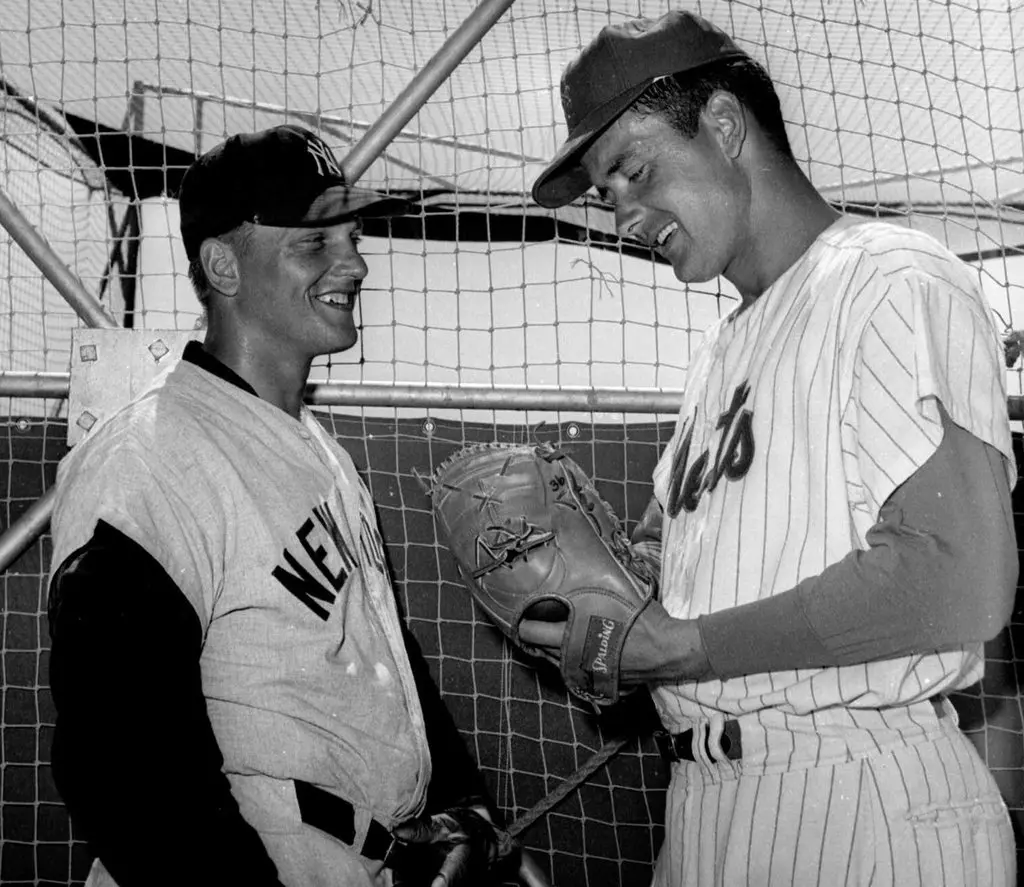 Roger Maris and the Mets’ Tracy Stallard in 1963, the first Mayor’s Trophy Game between the Yankees and Mets. Back in 1961, Maris hit his then-record 61st off Stallard, then with the Red Sox. AP Photo

Unlike everyone else involved in the Mayor’s Trophy Game, which was an exhibition with the proceeds going to charity. Yankees owner George Steinbrenner, who bought the Yankees in 1973, wanted to bury the Mets.

Former Yankees infielder Brian Doyle, who played sparingly (and poorly) for the team from 1978-80, recalled giving “110 percent” to make an impression on manager Billy Martin and Steinbrenner. Doyle said, “That game meant as much to George as the World Series and he was up in the box.”

Now they play for real, and as you might expect, many fans from both teams are now channeling Big Stein.