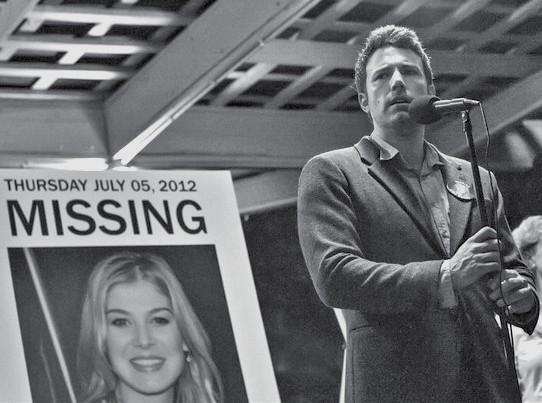 That Amy was a metaphor for the girl he couldn’t get. This Amy could get him on death row.

Based on Gillian Flynn’s best-selling novel, Gone Girl is about the sudden disappearance of Amy Elliott Dunne (Rosamund Pike) and husband Nick Dunne (Affleck) as leading suspect in her possible murder. While the book is a wily and witty mystery tour poking fun at the gossip-fixated media, the movie dives deep into horror, suspense and the murkiness of the soul. The special emphasis is on marital mistrust, with the always-dark Director David Fincher (Se7en, Panic Room) underlining that love and hate are two sides of the same coin.

We hear both sides through the crisscrossing voiceover narrations between Nick and Amy…hers is by way of a strategically discovered diary. Also unearthed by Detective Boney (Kim Dickens) are a series of written clues, courtesy of missing Amy herself. The clues, Nick explains, are part of a “treasure hunt” she plays with him at each anniversary. Except this time (their fifth), it seems to be more than a game.

All the while, the tabloids and TV are having a field day, turning Nick into a celebrity, first with applause, then back to “boos,” and around again, ever manipulating the insatiable media audience.

With a script by Flynn, Fincher tries hard to keep the twists and turns on track, eventually slamming into the train-wreck finale.

Gone Girl is an intense ride searching for the elusive “Amy,” with which Affleck’s characters seem obsessed. What we won’t find in the movie is humor. You’ll have to read the book for that.