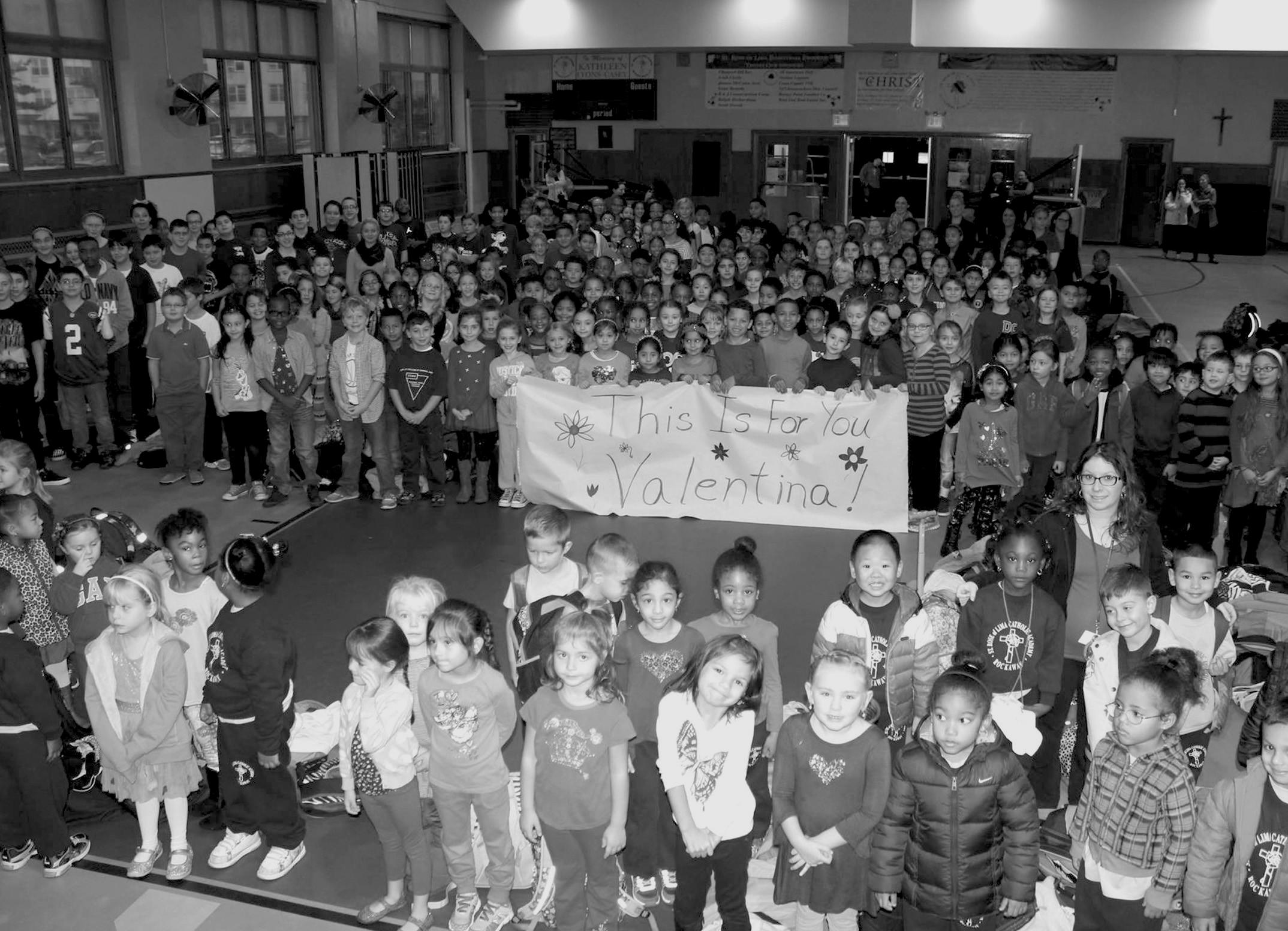 Students, teachers and staff celebrate a successful dress down day fundraiser and show their support for their friend Valentina Priolo.

The gymnasium of St. Rose of Lima School was filled with a sea of purple and smiles as students gathered to support their friend Valentina Priolo, a young girl with Rett Syndrome.

The event was held to celebrate a dress down day students, teachers and staff organized to raise money for Rett research.

“My daughter’s best friends that she met in pre-K at St. Rose of Lima, Aine and Mairead Harkins and Gabriella Sodano, sent a letter to their principal, Ms. Andersen,” explained Priolo’ s mother, Raquel.

The Harkins sisters and Sodano, who included a drawing of themselves and their friend in their letter, suggested the dress down idea.

Previously the girls, along with friends and parents, set up a lemonade stand at the Beach 116th Street Fall Fest to raise funds and support.

“The children wouldn’t give up and after their success selling lemonade,” noted Raquel Priolo, “they continue to create awareness for Rett syndrome.”

Speaking about the St. Rose event, which took place on Oct. 23, she said, “It might (have been) a rainy, windy Thursday outside but there was a blooming outpouring of abundant love.”

“We were so overwhelmed by the amount of effort put into this day. The sign made us so emotional, and the ocean of purple filling the gymnasium was an amazing show of support. Purple is a signature color for the Rett community.”

Rett syndrome is a neurodevelopmental disorder which affects girls almost exclusively. A flyer given away at the fall festival explains: “Imagine the symptoms of autism, cerebral palsy, Parkinson’s, epilepsy, and anxiety…all in one little girl. This is Rett Syndrome.” It was first identified by Austrian doctor Andrea Rett in 1966.

Priolo thanked Principal Andersen, Aine and Mairead Harkins and Gabriella Sodano as well as the St. Rose of Lima students and staff who “organized this heartwarming event for Valentina and all girls living with Rett Syndrome!”

“Paying it forward means so much more then funding for research, it means we’re not alone in our fight! How amazing to have an army of community (with us.)”