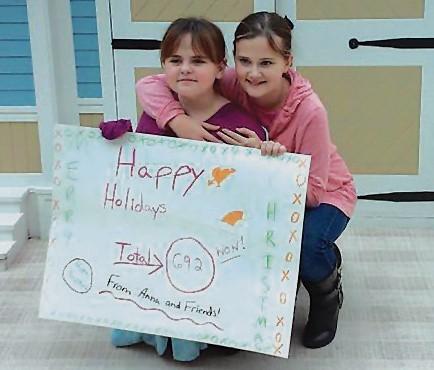 This week, NYMetroParents announced the winners of its first-ever Caring Kids Awards. The honor was established to celebrate children, ages six to fifteen, who have made extraordinary contributions to their communities through volunteer and community service efforts. Twelve year old Anna O’Connor of Broad Channel was among the seven winning entries selected from over a hundred submissions for volunteer and community service projects. No ordinary young lady, her proud mother Deborah recalls the devastation of learning in 2010 that Anna had been diagnosed with leukemia. It was the beginning of a painful journey that would end in meaningful triumph.

“When someone tells you your child has a life threatening disease and they don’t know what’s going to happen, it’s the most terrifying thing on the earth,” said Deborah. “It was a nightmare. They had to stick needles in her and test her every day. They put her on steroids until you could barely recognize her face, but she was amazing. She just did what she had to do.”

As the O’Connors faced their middle daughter’s battle with terminal illness, Broad Channel residents stepped up to the challenge and saw them through harrowing times.

“Nothing else mattered, recalled Deborah. “There wasn’t a choice. I had to quit my job of twenty years as a dental assistant. We were used to two incomes, so that was tough. Anna’s sisters were scared. But our community had a big fundraiser for Anna and brought food to our door. Broad Channel is one of the hardest working communities ever. For example, everybody here saw the damage Sandy did- and everyone was there for each other. Ask anybody who grew up here and they’ll tell you, we go beyond.”

Moved by family and friends’ support throughout her child’s ordeal, Deborah was overjoyed when she finally learned that Anna was on the road to recovery. However, as the two walked out of Cohen’s Children’s Hospital to join their family and celebrate

Christmas, Anna couldn’t shake the thought of friends she’d made in treatment spending the holidays away from the comforts of home.

The leukemia survivor’s mother remembered, “Anna said to me, ‘is Santa coming to the hospital?’ She was going home at last but so worried about those other kids. She’d gone through this horrible time and formed real bonds. When you’re stuck behind those walls, what else are you gonna do? We went out and bought ten or fifteen toys for the kids, and I posted on social media about it, and how proud I was of Anna. Then we we received five more toys, and then ten. I ended up going back to the hospital with a hundred toys and [the initiative] just grew from there.”

The O’Connors’ living room was soon stacked with toys as donations from the O’Connors’ circle of friends in Broad Channel and Rockaway poured in. Once word of her mission grew, Anna’s altruism went viral.

Deborah giggles, “As the months passed, the whole thing got a mind of its own. The Ronald McDonald House agreed to distribute half of the donations for us, and this year we had so many that we got involved with Friends of Karen, who help hospitalized children that aren’t going to make it. They were so low on donations that they even drove to our house, where Anna bagged up all the toys herself.” As she approaches her thirteenth birthday, Anna remains focused on bringing cheer to children who need it most. “Nothing seems to phase her too much,” marvels Deborah. “When we worry about something, she says ‘Calm down, we’ll manage.” In spite of complications following chemotherapy, Anna is now well enough to play on St.Camillus’ basketball team and works hard at her studies. “Everything comes together,” her proud mom sighs. “If you ask, she’ll tell you she’s gonna be a nurse. As far as giving back, I don’t see her stopping anytime soon. Our kids are caring. They do for others. We tell them, to be kind, respectful and giving. We tell them, ‘all you can do is try.”